A Day at The Show

There were horses jumping over fence things to see how many of the bars they could knock off. Some just completely missed the bars, but we cheered the ones that managed to knock a bar or two off!

Then there were the ones who reckoned they looked good and stood there all posing and saying 'Look at me, I'm pretty'.

Trouble was, they were getting soaking wet and all they got was a paper rosette! Pretty stupid we thought!

We went into the shed where they were doing the same with the cattle, only in here it was at least dry!

In here they were saying ' Look at me I can produce milk with a high fat content and I can produce loads each day' Which again Holly and me thought a bit silly. Instead, we were judging them by how many steaks or mince pies you could get out of one cow and also how many bones you could chew on!

By then Holly and me were getting a little peckish, so we took Old Two Legs off to the stand we smelt on the way in, and got him to buy a couple of Wild Venison burgers, one for him and one for us. Of course, he had to spoil it by asking for 'A Couple of Bambi Burgers' which had the whole queue in an uproar.

So, the man served OTL first just to get rid of us!

After that we went to watch some gun dog training but the noise of the pretend guns going 'Bang' upset Holly, so we left them to it and decided to go and see the sheep.

Now normally when we see sheep, Holly and me go all 'Woofy' and want to chase them all over the place, but this time they were in sheep pens and couldn't go anywhere and OTL kept a close hold on our lead and told us 'NO' if we barked.

He said we had to learn how to behave with sheep and they are very nice animals really.


So we said 'Hello'.
The first one we said hello to told us her name was 'Mint Sauce' and she was the 'Family Pet' really and came to the shows just to please her owners!

The next pen we met Kebab and Donner, they didn't have a lot to say but asked how we were enjoying the show and did we know who won the 'Black Face Sheep' contest. As we didn't know they then started to ask how the cattle judging was going 'cos they had a friend entering that section, Big Dave was his name. We said we hadn't seen him yet but wished them well.

Next we met up with Billie de Lambs-Wool, who said she had come a long way to be here for the show and how she expected to win her class 'cos she had a pretty face. Holly told her about our day so far and how much fun we have every day and Billie asked if she could come home with us but Holly said there would not be enough room in the car for all of us, but if ever she was passing please do drop in.

Around the next corner we came across the Not Not Neddies!
We recognised them straight away by their snooty look and also the smell. Holly had a good laugh and woofed 'Hello Not Not's'. That upset them and they whistled and stamped their feet and tried to tell us off.
Holly laughed even more and I said who was the daft ones, we could walk all over the show but they had to stay in the pen! 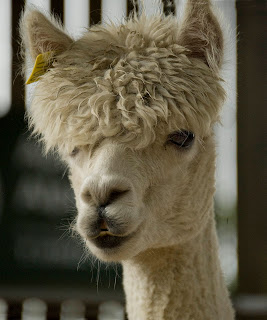 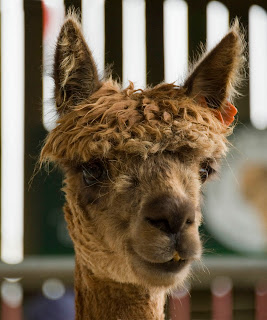 We did't stay too long because we wanted to see the Goats, but when we got there, OTL saw a notice that said doggies were not allowed in the tent.
Holly said it was because if they saw us they might 'Get the Goat' and show off, which OTL and I thought was funny!
It was about then that the rain started to come down, so we decided to go home, have a dry off, a snooze, a bit of chicken and get an early night 'cos we were coming back tomorrow!
So, we are off to bed now, bye bye for now and see you tomorrow.
Luv,
Daisy & Holly
Posted by Daisys Diary at 22:18:00 1 comment: