Daisy & Holly here, a little damp but worn out!

You know how expert we are at guarding the house and how we do our 'Puppy Patrols' every couple of hours or so? Well, last night we thought we were onto something.

We kept going out into the garden 'cos there was a strange noise going on and it seemed to come from just outside the garden gate, Holly said it was a Hedgehog and I thought it was a stray cat.

So, last night we kept a good look out and a listening watch for anything strange outside.

About three in the morning I heard something out the front of the house, then about four thirty Holly reckons she could hear something as well.

Well, we stood guard at the front window and woofed and grumbled and I even did my excited whine as well.

You know what? Old Two Legs slept all the way through it all and The Missus just barked at us to keep quiet!

No gratitude you know, after all that guarding! 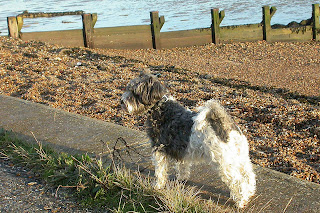 When we went out for our morning walk, OTL spotted some aluminium baking foil that had been ripped to bits, so we reckon it was a cat having a feast in our front garden!

Off we went to The Sea Wall and I was determined to catch me one of those Mouses that run faster than a Squirrel on Fire!

First of all I got Holly to stand guard and stop the Mouses from rushing onto the beach and escape!

Then I did what is known as a 'Flanking Manoeuvre' or better known as  'Going Around The Back'!

Then I heard a rusting and did my 'Nose Point' and Holly just flew at the spot, so did I and we got there at the same time!

Well, we were jumping around and diving into the grass but we still didn't find it and OTL was trying to take some 'Action Shots' of us hunting but even he missed the Mouses as well!

We soon got fed up with that and retired to our day beds after breakfast at home, that was until OTL picked up the car keys and said 'Brrrm, Brrrrm!'

Now that means, 'Do you fancy coming out for a drive in the car and maybe we will have an adventure as well'


Do we want and 'Adventure?'

Off we went and we landed up on the beach at Herne Bay!

Now this is the place that has got loads of beach huts at the top of the beach and there is always loads of food there where Two Legs come down and open up the huts and sit in front and eat food and watch the sea!

We know this 'cos we have been here when they have done it.

But we didn't get any food 'cos they were hungry and didn't want to give us any!

We decided that it would be a good idea if OTL bought one so we can spend the summer down here helping everyone to eat their food!

Today though, there was no one on the beach and instead we had fun running after the ball OTL was throwing for us, until it went into the sea and I got wet up to my tummy 'cos I had to go in the water to get the ball!

OTL did his deliveries and we headed for home but instead of going to see TM we stopped off at The Sea Wall again, just in case there were any Mouses around. We didn't find any and instead we got caught in a shower of rain!

Holly was the first to notice the rain 'cos a drop landed on her nose!

That was it, straight home to a rub down and finish off the last of our breakfast!

Next it will be mugging OTL for some of his dinner before a taste of his shortbread!