Hello Woofers!
McDaisy & MacHolly here again!
Today we went down to Calgary Bay again, a super place for running and digging holes in the sand.
Old Two Legs fell down one hole and we are sure it was one we dug yesterday! 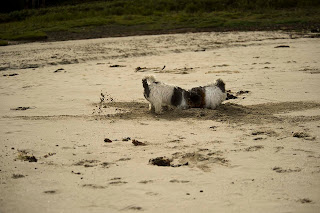 This time The Missus came with us and she spent most of the time looking for twiddly little sea shells to stick onto her cards. Holly reckons that she should go for a BIG shell and stick that on the front of the card, that will save loads of work!
We met up with a doggy called Charlie who had lost his ball and thought that me and Holly had it. We told him that we didn't have the ball but he didn't believe us, until Holly got fed up and told him to Woof Off!
Then we found a long bit of sea weed and Holly and me played at 'Chariots', running side by side along the beach as fast as we could go!
We went after the rabbits again but never saw any, but they do dig big holes!
OTL spotted some small holes where the Sand Martins had built their nests and we even saw one go into a hole, but OTL thinks it is a youngster going back for a rest 'cos all the eggs should be hatched by now and the birds should be thinking of moving south again!
The forecast for the afternoon was , cloudy, with rain showers, so we went off and did the shopping and OTL loaded yesterdays blog onto the internet. I would do it but they don't allow doggies in the shop 'cos it sells food and they are afraid that we will eat all the food, or summat!
It costs OTL a cup of drinking chocolate every time he goes in, 'cos they won't let him use their internet connection without him buying something!
The afternoon we spent having a game of chase with the ball then a snooze 'cos the rain came down and we dashed inside and refused to go out and get wet!
Even OTL and TM had a snooze as well!
All set for some liver and biscuits tonight for dinner and afterwards we will try to mug OTL for a bit of his 'Meat Free Curry' that TM is doing for the first time!
OTL is horrified!
We think she is taking this re cycling and saving the plant bit too far, a curry with no meat! What next, doggy dinner with just vegetables? That will give us the wind and she complains about our wind as it is so what will it be like if we are fed on vegetables only!
Terrifying!
Tomorrow, if it is not raining, OTL wants to go walking all the way to a lighthouse he has seen. He said that he and TM once tried to get there but TM fell in a big puddle and refused to go any further!
So, tomorrow, a 'New Place' for us all, except that TM will be staying at the caravan to make cards with her sea shells!
See you tomorrow.
Luv,
McDaisy & MacHolly
Posted by Daisys Diary at 12:07:00 5 comments: