Have we been good dogs or wot!

As you know, we take our job of 'Guarding' seriously and go out on 'Patrol' around the house every two hours or so. Well, this morning around four fifteen, The Missus had got up, and we had followed her down stairs for an early 'morning wee'.

We got to the kitchen door and heard something in the garden that shouldn't be there! That was it, as soon as the door was opened, we shot out, doing our 'Attack Woof' and shot up the garden path.

Both of us carried on the 'Woof' and went crashing around the back of the shed, bouncing off the fence panels and tripping over the plant pots Old Two Legs had left there!

I'm not too sure what it was we were chasing but Holly reckons it could have been a Fox!

TM called us back in 'cos all down the houses lights were going on and people were getting up to see what all the fuss was about!

Well, we left TM down stairs and went back up to OTL for a cuddle and a snooze before he got up to take us out for our morning walk.

Down on The Sea Wall we started off with a little 'Rat Hunting' near the rats nest but although we can sniff them we couldn't flush any into the open.


Holly was up for some fun and we chased each other along the Sea Wall and OTL even got the ball out and threw it for me. He still managed to bounce it onto the beach, he really is not getting any better at throwing!

OTL was getting all soppy with his camera playing about with the light and trying to improve on his 'Sunrise' pictures. Maybe he will do better next time!

We were running and jumping around and generally having fun when we heard a big noise up ahead that sounded like a doggy was having an argument with someone! We couldn't see them but we thought it would be a good idea to keep an eye open for any sudden movement 'cos we could get involved in a ruckus without meaning to!


We never saw what was happening, which is OK by us!

After we got back home, OTL gave us a brush and we then wandered off to get some breakfast, Doggy Scoff!

Oh no, it was back to dried biscuits and see if we can mug OTL for some of his lunch!

It was good and sunny when we went out at lunch time, well not blazing sunshine but not too bad!

We spotted the fishermen on the beach and asked them if they had any food 'cos all we had at home was Doggy Scoff but they had eaten their lunch, so no luck there!


I asked OTL to get the ball out and he threw it down the path, as normal, it went all over the place but I managed to catch it and rush off into the grass with it!

He came and picked it up and threw it again, but this time, it bounced on the path, then on the steps, then on the beach and finally it went Splash, straight in the sea! 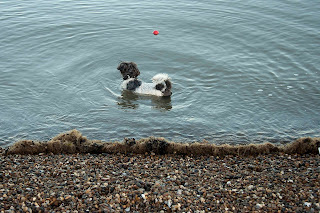 Well, what could I do? In I went and tried to fetch it back out but the tide had turned and slowly it started to drift out to sea, with me getting deeper and deeper in the water, that was until OTL called me out. Which was just as well 'cos my paws had come off the bottom!

When you look at it you can see the tide was right up the beach and this beach is a bit steep!


Well I was soaked right up to my collar and it was getting a bit cold!

OTL spotted that and we all had a jog along the Sea Wall, that was until OTL spotted a Cormorant that had just caught it's lunch, a nice sized Bass!


Then it started to swallow it!


It dropped it a couple of times but in the end it went down, head first and without chewing!


It was a mighty big fish and I bet the fishermen would be pleased if their worm came back with one of that size!

Holly was speculating on what the Bass tasted like but in the end agreed it would be nothing like chicken!

Back in the car OTL gave me a good rubbing down with a Doggy Towel he had brought with with us.

Back home I curled up in the day bed and had a good snooze, I mean, all this 'Cross Channel Swimming' can be very tiring!