It's us again, McDaisy & Mac Holly!

Have we had some fun today!

First of all it's The Missus & Old Two Legs wedding anniversary today, they have been married twenty five years today. They got married in Gretna Green and we plan to stop there on the way home just so OTL can ask if he can have his money back!

We were up early, all ready for our morning walk and TM took us for our early morning 'Wee Walk' which was OK 'cos it's not raining. However, when OTL took us out, we got as far as the gate and it poured down! OTL was walking down the path in his own little world, all wrapped up against the weather and there was us getting wet!


A quick woof sorted him out and as soon as he opened the gate we were off like rockets back to the van!

Well, after a while we were bored and told OTL to make it stop raining!

You know what, after a while it did, so off we went again and this time we had our game on the beach, getting just our feet and tummies wet!

It was good trying to find the rabbits that hide on the beach, but we didn't see any!

Holly was playing at being a sailor again and kept calling out 'I see no Ships!'

After that we had a brush back in the caravan and we both looked 'The Business', OTL can do a good job if he puts his mind to it!

TM wanted to make some cards or Tags for her blog so we left her to it and dragged OTL off to the big beach down the road.

We were there yesterday and had caught a sniff of rabbits! OTL had a telephone call from one of his customers, so he had a busy half an hour or so on the phone. That was OK by us 'cos as soon as OTL stopped the car we were out and 'Hunting Rabbit'!

We managed to find a couple of rabbits in the gorse bushes and had a glorious time chasing them from hole to hole!

We finally ended up at the gorse bush at the far end of the line of gorse bushes, the rabbit had run out of holes!

Holly and I were working as a team, she stood guard in case the rabbit tried to escape from any of the other holes and I took to digging the rabbit hole to make it bigger so we could get inside!

I was a 'Puppy Possessed'! There I was digging like crazy, the roots that were in the way I tore at them with my teeth and ripped them from the ground! I was snarling and woofing and growling!

Mind you, it didn't help having a Gorse Bush Spikes stinging at your bottom!

Holly was having a dig as well when I got a sniff from another hole, but most of the time it was me doing the digging!

Well, it was at this point that OTL finally finished with his telephone calls and got out of the car to find out what we were doing.

That was it, he dragged us out and put us on the lead to stop us from going back in again! 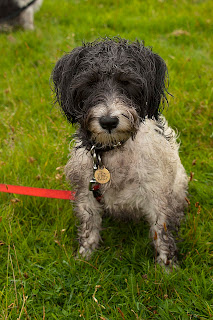 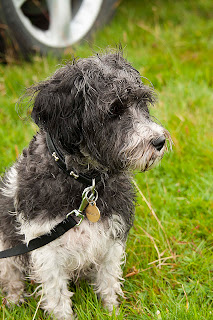 
I really didn't see what was wrong, I mean, it is part of our job description that we can get grubby every so often!

Well that's it, we were confined to the caravan after we got washed, all over, and TM & OTL told us we had to be good puppies 'cos they were going out for a meal, without us, as a anniversary celebration.

So, it looks like an evening of snoozing on their bed until they come back. Mind you, we need a rest after all that digging today!