Sailing on the Grubby Gertrude?

Daisy & Holly back with you on a very wet and windy Monday, just like they should be, unless you are on holiday like us!

We had some fun last night, you know how Holly has got this thing about her chew, possessive just doesn't come near to describing it!

Well, around five in the morning, Holly gets that 'I need a cuddle' feeling and decides that she wants to get on the bed with Old Two Legs and The Missus.

Being a little too rotund to make the difficult jump from floor to bed, she walks up the passage way and puts her front paws on the bed, just about level with TM's head, then she does her soft 'Woof' to let TM know that she wants to be lifted onto the bed.

TM opens one eye and sees Holly there wanting a lift and stretches her arms out to pick her up. Holly, seeing TM is awake, turns, and rushes back down to the other end of the caravan and digs her chew out from under her blanket and runs back to TM, who then lifts her onto the bed, chew and all!

Got it sorted or wot!

We woke to the rain beating on the roof and the wind blowing the awning about, so bang goes our day of sun bathing on the sandy beach! Instead OTL takes us back down to Dungeness Beach, all stones but super sniffs!

We find all sorts of stuff, Holly found some fish bones and was having a chew when OTL made her drop it 'cos he said it may stick in her throat!

Stick in her throat, I reckon it wouldn't get past her mouth!

Holly found the back end of a Dog Fish that had 'Matured' quite nicely and proceeded to roll in it!

Then we wandered down the beach a bit to see the fishermen, they still didn't look happy!

We found a boat that may do for us to go 'A Roving' on the high seas. We had a good look around and was trying to work out how many chews it would take to get a good paint job done!

Holly worked it out and decided it was a Chew Too Far!
It was a shame 'cos I had thought of a good name for it. 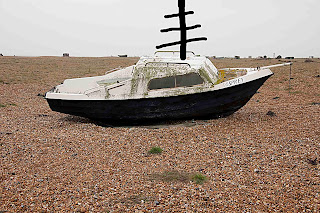 When we got to the Lighthouse, Holly saw some very big speakers and asked what they were for. OTL explained that they were 'Fog Horns' but instead of air powered as in the olden days, these were electrically powered!

Holly said that if we could get them into the back of the car they would win the 'Biggest Sub Woofers' competition paws down!

OTL spotted an old wooden shack that looked like it could have come from one of the Harry Potter films!

It was all creaky and wonky and the rabbits had made a home underneath the floor boards and the sniffs were Terrific!

Back to the caravan for some lunch and then a trip to the Supermarket followed by an afternoon of gentle snoozing before the evening fun of Shortbread Mugging!

This is our last night down on the caravan site, so OTL is going to 'Splash The Whisky' tonight, just for a change and in the cause of science you understand!

Bye bye for now, see you again tomorrow when we get home.