Getting Ready for The Show!

Wot a busy day! We were up early to get The Missus off to her weekend of Craft & Carding up in Daventry. Old Two Legs forgot the card for the camera, so no pictures of ferrets this morning!

Still, OTL has spent all afternoon grooming the pair of them and don't they look 'The Business'!

That is until Brambles goes swimming in the water bowl and then rolls in his poo tray!

We have prepared a notice to tell everyone about how they came to live with us, what do you reckon?

We are, Miss Snowflake and Mr Brambles.

Snowflake turned up in the back garden on a cold 27th December a couple of years ago and was spotted by the dogs, she was hiding under the shed. She was brought inside and given some Ferret Kibble and a lump of raw chicken.

She stayed in the shower for about a month until we found her last owner who agreed to pass on ownership to us.

She had seventy four ticks that had taken up residence on her and were removed over a three day period.

She used to be a 'Working Ferret' but had suffered some trauma at some stage causing abnormal bone growth on her spine and rib cage. Lucky for her, it doesn't cause any problems, nor does it stop her chasing Mr Brambles around the house!

Mr Brambles came to us from the Harrietsham Ferret Rescue Centre, to live with us as a friend for Miss Snowflake. He has two toes missing from his back leg but it looks like a birth defect rather than an injury. He is the perfect gentleman. He loves cuddles, Chasing Games and Dog Biscuits, which he pinches from the dogs bowl every morning!

Us ferrets are walked every morning on the beach and in the grass field at Isle of Grain, for about an hour, together with the two dogs, Daisy & Holly. Life is good and we have now both found our 'Forever Home' 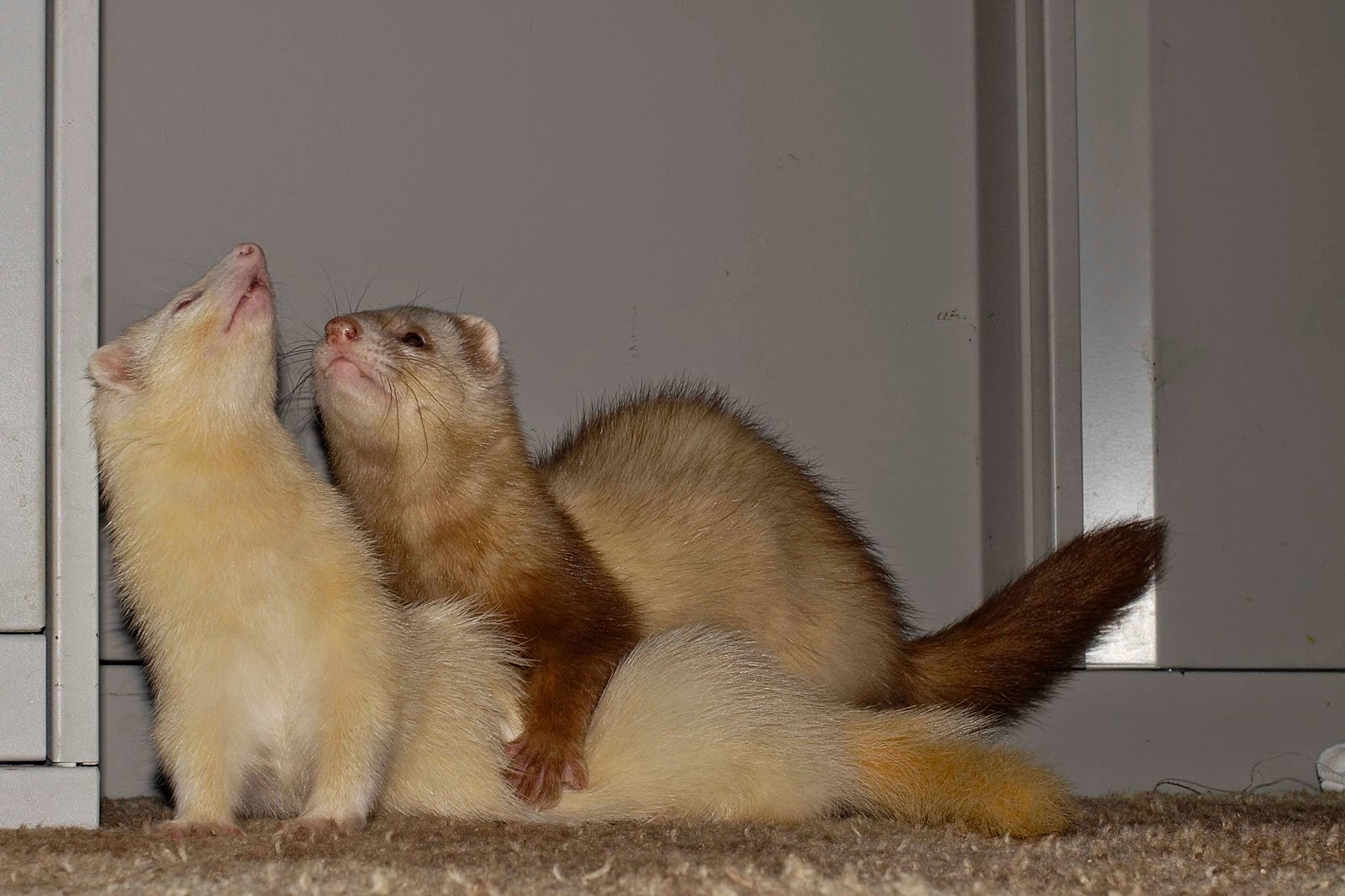 There are a couple more photos showing Brambles raiding our biscuits and Snowflake in the shower when she first arrived.

That should get a few Oooo!'s and Arrrr!'s and it saves us keep explaining how they come to take over here!

Lunchtime we were out down the beach, with the camera but no ferrets!

We had a run along the beach and on the sand and then OTL says we got to 'Pose' so he could include us in the Ferret Information Notice, but in the end we decided it was for the ferrets and not us!

It was more fun chasing each other up and down the beach!

I had a great time digging a hole that was almost a hundred feet deep, honest!

Holly was practising her 'Commando Crawl' that she uses when she is sneaking up on rabbits!

We had a game with OTL, we would go off into the grass for a sniff or a wee and he would hide. When we looked for him he was gone, so using our super sensitive noses, we hunted him down!

This afternoon we have been cleaning the ferret Show Cage and sorting out some bedding for them.

Mr Brambles is getting all excited about tomorrow and the possibility of maybe meeting his son, Buddy, again!

We'll let you know what happens!