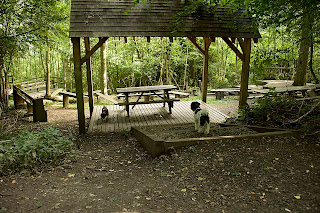 It's Daisy & Holly here with you again.

Holly and me were late in getting up this morning, even Old Two Legs over slept! The Missus was up early and was doing some gardening out the front of the house, so she didn't take us out for a walk. Instead she left us to snooze and only started making a noise at eight!

Well, that was it, wake up OTL, (the old cold wet nose in the ear followed by a lick on the back of his ear) then we were out over The Fields looking for sniffs and chasing each other across the field.

Just for a change, Holly ran up behind OTL and gave him a shove on the back of his leg, (just like I do) then she held up one paw which is our sign for him to pick us up. She sat on his shoulder and had a good look all around, just to see what was about.

After a few minutes she got down and we had a chase all along the path.

Back home to a liver and chicken breakfast and up stairs for a snooze in OTL's office.

After lunch, OTL had to go out  to do his deliveries and we went with him, of course!

After the first couple of deliveries we stopped off at the New Park, that was great, we can really get a good run going along the path and there is always loads of other doggies to have a chat to!

This time we didn't go by the Swimming Hole 'cos OTL still had deliveries to do and as he says, he doesn't want wet paw prints all over the parcels!

It wasn't long before he had finished his work and we found ourselves close to Trosley Park again, so we had a vote and told OTL to 'Go To Trosley!'

As soon as we got there, we were out of the car and charging along the path. We stopped at a path that had a sort of arch type of thing over the path. We had not noticed it before and Holly said she was sure she could hear a rabbit!

Holly had a quick run down the path but the rabbit had disappeared down his burrow and she could hear him laughing at her!

OTL was looking at some very old Yew trees and he said that they were very old, at least a few hundred years old and that's very old, even older than OTL!

A little way down the path we came across a place that was full of chairs and tables and benches, all looking to one part, OTL said that it was a sort of outdoor stage.

It was called a Theatre  and plays and sing alongs were held there.

Holly decided to try to act out a play but she kept on forgetting her words, I sang a small song but no one joined in with me, then OTL tried what he called some Shakespeare.

He started off with 'To bee, or not To Bee, that is the Question'

We rolled on the floor laughing, just imagine OTL with a pair of wings and sticking his head into the flowers, especially with his hay fever!

It was then that Holly said we had not listened properly, it was 'To Pee, or not To Pee, that is The Question'!

Well we all had a good laugh about that! We even told TM about it when we got home!

Tonight we had a treat, after our chicken and liver diner, we got a carrot each!

Do we get spoilt or wot!