Guess what? It was a year ago today that Miss Snowflake crawled out from under the shed and we spotted her! We were told she was 'Two Years Old' so, we have decided that December 27th is going to be her birthday each year! 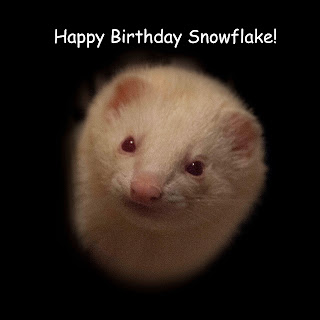 So, Happy Birthday Miss Snowflake, three years old today! Not that she was excited about a run on the beach, but we went anyway!


We all joined in the Rock Climb, even Old Two Legs had a go as well!

Late morning OTL had to go out to the car and when he came back he told us to stay away from the windows! Why? Well, it seems that last night as the wind blew, it started to blow one of the trees over in the front of the house and not only that, it landed on the tree next to it, sort of like domino's when they fall against each other!

This afternoon, OTL, (I'm a Lumberjack and I'm OK, I sleep all night and most of the day!) was on the telephone trying to find a Tree Surgeon, no success!

So, off to B&Q for a Bow Saw and into the garage for a ladder and he chopped it down in sections, all on his own!

We sat at the bedroom window and watched bits being chopped off and it came down just where he had planned it to, clever OTL!

Now it is a case of getting a Tree Surgeon in to take all the other trees down and make it into a Car Park!

I bet the birds will have a thing to say about that, nowhere to build their nests!

I think that there may be more discussions before a final decision is made! I mean, you cant throw the birds out of their homes!

We are off to do some mugging 'cos we are both feeling peckish!

Snowflake is holding a Birthday Party tonight and we have all been invited, and it's a 'Bring a Nibble' party!

See you tomorrow and we'll let you know what happened!