Have we had an exciting day today!

First of all there was the morning walk, in the rain, pouring down on our heads and soaking us through to our tails!


Old Two Legs insisted that we have a 'Reasonable' walk and led us off to the place where we normally turn for home!

We did spot a Wormy Man out on the mud digging, Holly said it looked like he was playing sandcastles, but with mud, so that means he was playing 'Mud Castles!'

Back home for a good rub down and a bowl full of Doggy Scoff!

Turkey and High Living one day and Doggy Scoff the next!


Lunch time the rain stopped so we were out again and we had an even longer walk this time, down to the Cuckoo Path before we turned.

We also met up with a youngster who said that she was six months old and seemed to be a bit scared of us!

Bet the table will turn in another six months!

We told her of a couple of really good sniffs back down the path a bit but she said that she was not allowed off the lead yet!


Back home we let OTL get on with some work in the office while we had a sniff at the Doggy Scoff to see if it had got better, it hadn't!

Then Holly spotted something in the garden, something small, white and sort of small squirrel like!


Well, that was it, we were at the window giving it some woof!

All our woofing brought OTL out of the office and down to see what the woofing was about, then he spotted it creeping behind the shed.

'It's a Ferret' says OTL and we watch it for a few minutes, that was until we decide it wasn't going out of the garden and it was going to continue driving us mad!

OTL grabbed my bowl of Doggy Scoff and went out on his own to see if it was hungry, well, it had a couple of mouth full then dived under the shed. OTL then decided that it was a pet that had escaped from someone in the area and said we should first capture it and then see about finding its home.

Now, OTL has absolutely no experience of ferrets other than what he has seen on TV, where they sink their teeth into the presenters finger.

Yep, that's what happened to OTL when he put his hand down to grab it!

So, with blood dripping from his finger he distracted the ferrets attention with his other hand and grabbed it across its back and picked it up.

Next, OTL got a big cardboard box and into the box went the ferret, followed by a bowl of water, which it jumped on and spilt it all over the floor!

Well OTL spent the next hour or so on the phone and The Missus went banging on doors to see if anyone had lost their ferret, no luck!

All the local animal rescue centres either 'Didn't Do Ferrets' or 'Sorry, we are full up with Ferrets' or '....If it is urgent please leave you name after the tone......Beeeep'

So, no joy there. Next he decided that the ferret looked like it was going to be staying overnight at least, so a quick look on the Internet for some advice on Ferret Feeding! A trip down to the Doggy Shop got a bag of Ferret Nuggets Food and a china bowl so she couldn't knock it over!

OTL had a look and spotted it was a girl, or as they are known a 'Jill'

Where to 'Store' this ferret was the next question? In the end we decided that the shower was going to be the best bet 'cos it couldn't get out and if it had a wee or a poo, OTL could wash it away before he had his shower!

So, here we are, ferret in the shower absolutely stuffing itself full of 'Ferret Nuggets' 'cos it was starving!

Being an Albino Ferret it is whitish all over and has pinky red eyes and after feeding it went over to Holly and they both exchanged 'Hairy Eyeballs'!

I'm not too sure what is going to happen tomorrow when OTL wants a shower but he is on the phone trying to find a good home for Snowflake!


So, if we can't find it a home tonight, we could have it for a while! 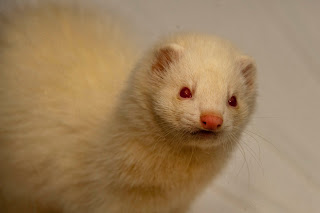 By the way, so far it has bitten OTL twice, both times when he wanted to pick it up, once from behind the shed and once when he tried to get it out of the box to put it in the shower!

Holly reckons that it could taste like chicken but OTL says that she isn't going to find out 'cos it will bite her back!

We have located a lady in the village who takes in lost an bewildered animals but she can't take Snowflake 'cos she has a shed full of Hedgehogs, so she has loaned OTL a cat travelling box so he can put Snowflake in while he has a shower.

Another problem solved!
Posted by Daisys Diary at 19:18:00 2 comments: