This morning we decided that is was going to be another foggy and dismal day, so we got up, had a stretch, then jumped up on Old Two Legs bed and snuggled down with him for an 'After wake up snooze'. We like those snoozes, all sort of warm and cuddly!

Finally we were forced off the bed with The Missus wanting to straighten up all the bedding, which we don't mind 'cos it makes it good and comfortable to snooze on!

We were just about to get back on for our 'second snooze' when she calls out 'Walkies!'

That's it, we were off down the stairs like Puppy Rockets!

When we got outside, bless our tails, it was sun shine and balmy breezes, that was it, off we went at a gallop for The Fields. We had a great time woofing and chasing each other all along the paths and on the way back we came across 'Hissin Chrissy', that nasty cat with a 'Bad Attitude', it was terrorising a pigeon who was sitting on the fence post too scared to move.

We dived through the fence and went as far as our lead would let us, Chrissy let out a surprised yell and went from cuddling the ground, like they do when stalking something, to standing on the tips of her claws with her back arched high in the air and tail straight out the back. He mouth was open and she was showing her teeth as well!

Not that we were worried, our charge scared the cats poo out of her and she leapt up the brick wall in one bound and was away like the wind, muttering something about catching us when we're asleep! Ha! That pussy cat is so slow she couldn't even catch a cold!

After lunch we went down The Farm and had a terrific time chasing foxes through the woods.

Well, I did, Holly decided that it would be better if she stayed close to OTL as the fog was closing in again and especially as a man came past saying he had lost his 'Staffy' and we are a little wary of that type of doggy!

Holly was keeping a close watch out for the Staffy! 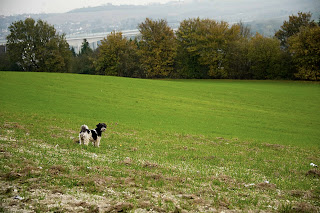 OTL did find a couple of fungi in the woods and had a quick snap before the light faded, pity he didn't have his tripod with him, still they don't look too bad really!

These two looked like they popped up today judging by the earth still on their tops!

We spent the rest of the afternoon snoozing and playing games with the chews. Holly can throw a chew over her shoulder and almost catch it as it lands but it keeps banging on the coffee table and when it does she gets told off!

We're off to mug OTL for some of his dinner now and afterwards, his shortbread!

So, bye bye for now and we'll see you tomorrow.