A sad day for us all.

Last night Old Two Legs went in to give Miss May her medicine before bedtime.

Monty de Ferret was asleep on the hammock, cuddled up with Miss Wendy, fast asleep.

OTL decided not to wake Monty and instead gave him a little stroke on the back of his neck.

This morning when OTL went in to see the ferrets he found Monty, cold and stiff, he must have died around midnight, still in the same position where he was cuddled up with Wendy.

Monty has been with us fifteen months and he came just after the lovable  Freddy de Ferret passed on.

We took Monty as we heard that he was been bullied by the other ferrets in the cage and he has been thrown out of the bedroom and forced to sleep on his own!

Well, you don't leave a ferret who needed help and even though he got a nip or two from Wendy!

He took some time to settle in with Miss Wendy but after a couple of weeks they were snuggled up together.


Once he had settled down his confidence grew in leaps and bounds and when he was taken on holiday with us in the caravan and found he had a sandy beach that went on forever his character just bloomed!

He became more relaxed with Wendy and soon was having a great time play fighting with her!

We were not sure of his age when he came to us , possibly six months old, so that plus the fifteen months with us makes him around two years old.

Monty is now resting in the big urn in the garden where all the other ferrets are sleeping, so he won't be alone and OTL often goes out to tell them what's been happening!

Miss May is looking sad and although she like cuddles from OTL you see her wandering around the cage looking for Monty to have a cuddle.

We may see if the Harrietsham Ferret Rescue has a little ferret who is in need of a forever home. 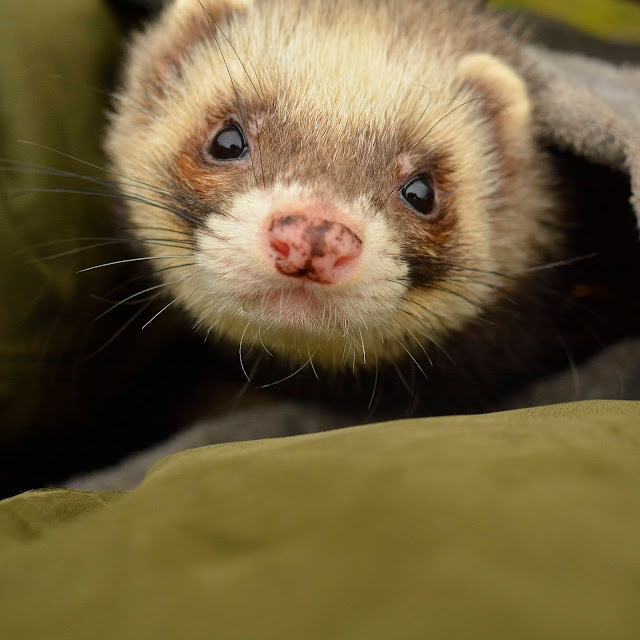